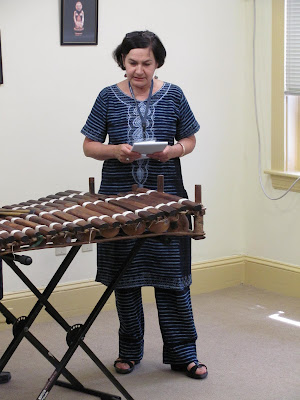 Jennifer Yanco, The West African Research Association (WARA), U.S. Director. She has been a great source of information and has been very helpful in a multitude of ways. 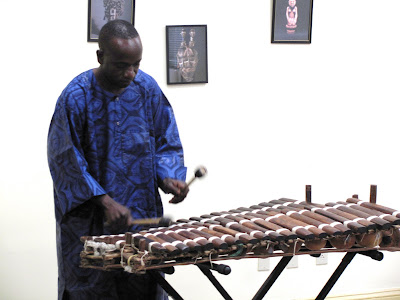 Balla Kouyate. Look him up on YouTube. Several examples of his music can be found there. 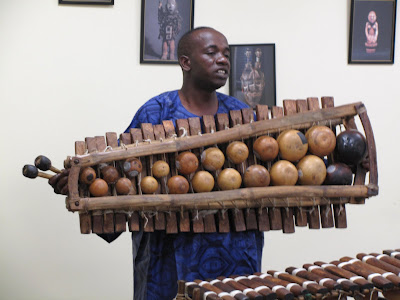 The gourds on the underside of the balafon make the beautiful varieties of sounds. Balla says they must be replaced relatively often. 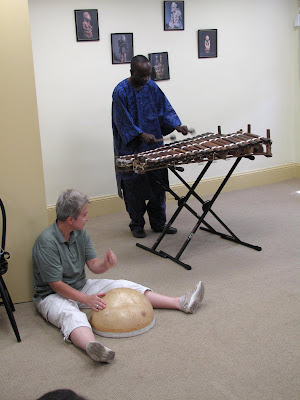 My roommate for this Boston portion of the trip, Therese Laux, is a percussionist. She gets a chance to play with Balla here. Note the ring on her finger. It is strategically worn to create the "clicking" sound. 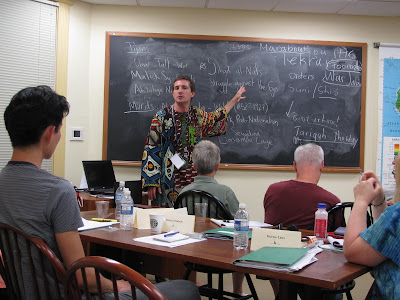 Alex Zito, above, teaches about the Islamic Brotherhoods in the Senegal region. Maase Ndiaye also expounded on the history of Islam in Africa.
Boston is getting a bit hotter. The humidity is climbing. However, by the time it becomes very uncomfortable, my Fulbright group will be in Dakar. Tomorrow morning we leave at 8 a.m. to begin another twenty or so hours of traveling, waiting, and traveling until we are in Dakar by 4:45 a.m. Monday the 5th. I can't imagine that I will have anything to tell you about regarding the day of travel, but one never knows for sure what events may come.
After viewing a film called Syntaxe Urbaine, by Arfang Saar, which is about the city of Dakar and is a historical and geographic overview, there were more Wolof lessons. I practiced bargaining with an imaginary taxi driver, asking where the bathroom is, and complementing the meal I have just eaten. Laurie and Steadman seem to be catching on very well. I worry about speaking Wolof, but may be able to code switch to a little French and English to get along. I'll take the handouts and my notes along on the plane to practice. I will also be completing some required reading tomorrow during our travel day. We then learned about the history of Dakar as an intellectual hub in the West African region. Samba Gadjigo, a professor of French at Mount Holyoke College, is like a walking encylopedia as he describes the chronology of the development of educational systems in Dakar. Sue (I did not learn her last name), who has lived in Africa for 33 years, shared social protocols with us. We, for example, will likely be eating some meals with our hands. We should NEVER use the left hand to eat when using a common bowl. Nor should we shake hands with the left hand UNLESS it is the last time we see the person. Why? Well, the left hand is thought to be used for very dirty business (IYKWIM!) If, however, it is the last time you will see someone, perhaps for a very long time, you shake hands the wrong way (left-handed), so that you must return to shake them the correct way. That completed, we moved on to an interesting performance. You may not have heard of Balla Kouyate, but perhaps you know the name Yo Yo Ma. Balla Kouyate is a balafon player and a griot from the Sundiata line. He has played with Yo Yo Ma and has also played at the Kennedy Center. It was an honor to see him perform today. An early afternoon break was followed by more Wolof lessons, and discussion about Islamic diversity and Brotherhoods in Senegal. A tasty Senegalese dinner including a dish called Ceebu Jen (rice, fish, ??) followed. If I were to get on that plane tomorrow, and it took me home instead of to Africa, I would feel that I have learned a great deal and had a very eventful seminar. To know that I still have four weeks ahead of me is extremely exciting. It's a little scary to leave the continent and the comfort of an English-speaking country, but I have waited for this day a very long time and am looking forward to it with great anticipation. Ba beneen. (Bye, bye)
Posted by Arlis Groves at 8:12 PM