A great place to get a sampling of what contemporary West African artists are creating is the Village des Arts in Dakar. My post of 7/11/10 introduces you to this wonderland of creativity. A community of local artists have studios all together in this one place near the major stadium in the north part of town. The government sponsors this effort. On the grounds, there is a gallery for the display of selected works. Some of the artists are highlighted at http://www.typicartsgallery.com/. 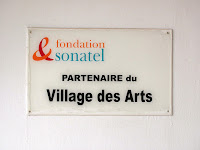 A gander through the gallery was an experience in itself. After the cab adventure I told you about in my entry called "Transportation - Getting from Here to There" of 8/7/10 and upon arrival in the art village, Sue, Suzanne, and I went our separate ways as we were each interested in different art and had different personal reasons for visiting on this day. Admittedly, Sue and I needed Suzanne to interpret for us in some cases, and she was patient and gracious as she made the link between us and the artists we wished to speak with. Sue, by the way, had a special bond already, with a young artist whom she had interviewed for her curriculum project. These kinds of personal interactions are the pieces of this trip that will last in our hearts and memories the longest. Sue would have to tell you her story. 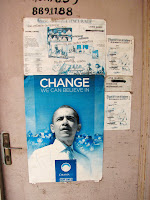 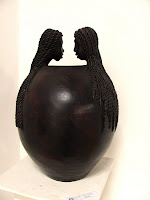 Poster and "Les Jumelles" by Alpha Sow
The Obama poster is typical of many hints at the village and beyond that Senegalese people are watching the U.S. and rooting for Obama in his role as president. T-shirts with his picture abound. Back to the gallery - - - The floor of the gallery was of sand or sawdust. By now I can't remember exactly which, but I had the impression of soft, quiet, and the fresh scent of wood. During my visit, I was the sole observer. Sue and Suzanne were otherwise occupied. I snapped only a few photos of the art represented here. 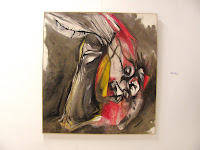 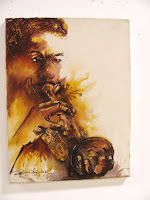 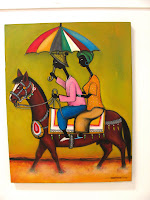 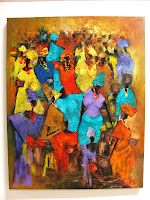 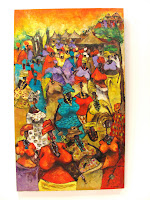 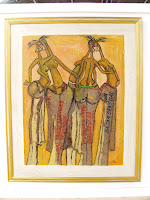 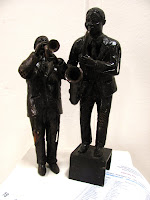 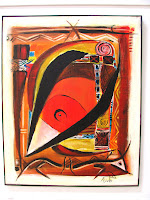 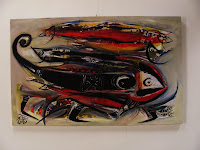 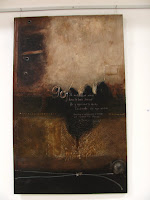 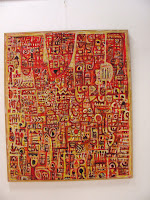 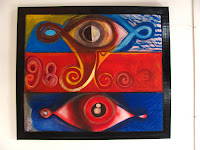 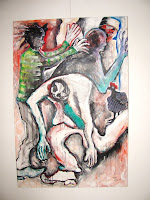 "Objectif" by F. Camera
The artist whose studio I spent the most time in on this day (July 30, 2010) is called Seni Mbaye. He spoke enough English that we could communicate about his work. He had jazz playing on the boombox and was working on a series with jazz as an inspiration. He had been in New York in 2007 as a guest artist and had a photo album which we looked through as he described his experience there. I came home with two of his paintings. In fact, were you to see me in any of the airports I spent time in on my two-day trip home, you'd have seen me carrying my rolled-up canvases, wearing my backpack over my Bohemian-style brown dress with the teal scarf that protected me from mosquitoes faithfully for the duration of my visit to Senegal. I was quite the sight.
Posted by Arlis Groves at 7:16 PM