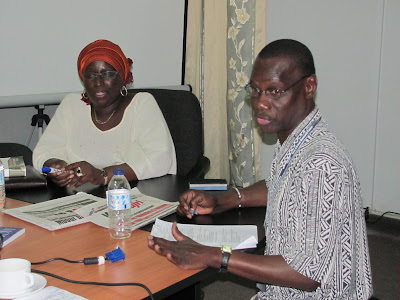 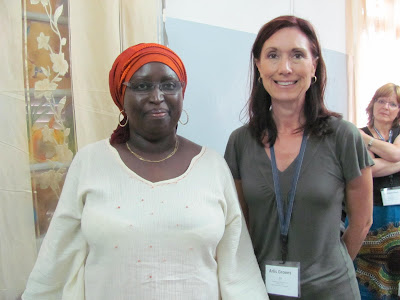 Professor Penda Mbow, Historian, was a dynamic speaker. She is an expert on Tradition, Religion, and Change in Senegalese society. She also spoke about the gender issue in Senegal. This was very enlightening. To adequately relay the information she shared would be difficult in this forum. African tradition and women's role in it, traditional Islamists, Brotherhoods, and the state are intricately entwined in a "chess game", if you will, as some work toward bettering the community, and others seek power for themselves. 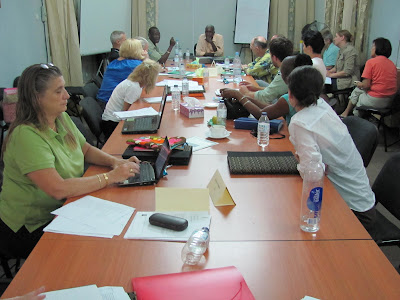 This represents some of the classwork we are doing on this trip. Lectures, film reviews, and project planning keep the scholar in each of us busy. This group is great to travel with. They are positive and motivated. Each individual has strengths that enhance our discussions and project endeavors. More work on our projects will be done in the next few days. Our directors have been front-loading our knowledge banks so that when we see the sites, we will better understand the signifance of each one. 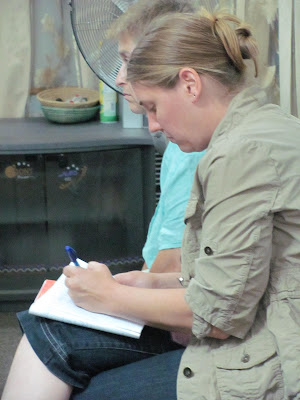 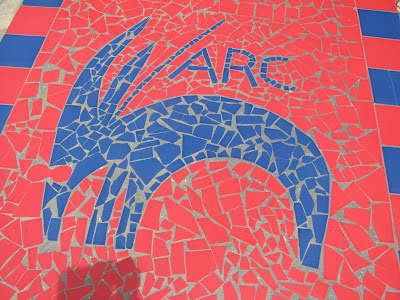 We work, daily, at the West African Research Center, http://www.warc-croa.org/ . This is the mosaic on the walk as you enter the compound. 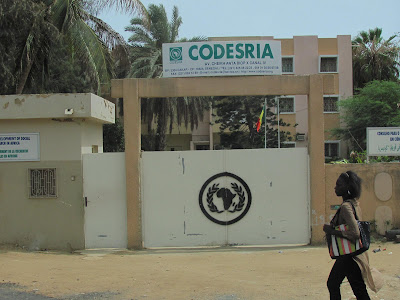 One this day, 7-6-10, we toured the local colleges. When I say local, remember that Dakar is the capital of Senegal, and the colleges here are very prestigious. We passed by the Universite Chiekh Anta Diop, which is where the Director of WARC, Ousmane Sene, teaches African Literature and is chairman of the English department, on our way to CODESRIA (Council for the Development of Social Science Research in Africa). We were informed about the mission of the school and the programs it facilitates. http://www.codesria.org/ Basically, CODESRIA facilitates research, promotes research-based publications, and creates multiple forums for exchange of views. Classes are super-crowded, so competition is stiff. There simply aren't enough schools at any level to accomodate the great numbers of students who wish to continue their education. There is never enough of anything in this developing country. These are not my own words but the words of our speakers during the informational round-table. Samba Gadjigo describes the system as an upside-down funnel. Many students can enter school at the kindergarten and primary levels (widest part of the funnel), although this schooling my take the form of private Qur'anic study until the age of five, which is not state controlled.
DIGRESSION WARNING! - The young, mostly boys one sees begging on the streets are often part of a group of "school" boys studying under a marabout, or religious teacher, who sends them out after morning prayers and study to beg or sell goods for money. The money is turned over to the marabout for his support. The parents of the boy have "given" him to this teacher for a pre-determined period of time. He may, then, return to his family, where he might or might not have the opportunity to attend public school. Private schools are very expensive.
BACK ON TOPIC - Over time in a child's life, depending on his family's economic, and sometimes class, situation, it is more likely that his education will be interrupted by a variety of more basic priorities. Thus, the young people who complete higher education may "pop" out of the narrow top of the upside-down funnel Professor Gadjigo describes. As you surmise, the educational system needs both help and independence from the state government. There are several political issues that affect the school system. I hope to describe my better understanding of the political and religious current issues in a future post. Sue listens to Ousmane Sene as he expounds on the educational systems providing higher learning for Africans. On the far right is Dr. Ebrima Sall, Executive Secretary. Regretfully, I did not write down the names of the two panel members in the middle. My apologies.
Posted by Arlis Groves at 11:22 AM