Mangroves? We're going to see the mangroves? To be perfectly honest, the image I conjured up when I heard the word, mangroves, was this. I could vaguely remember something about mansomethings in Harry Potter, so I was more than curious. None of my colleagues knew that I was clueless, though. I never let on. 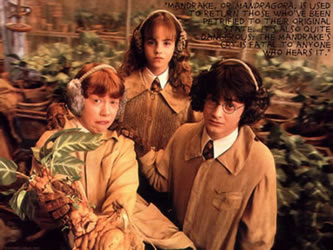 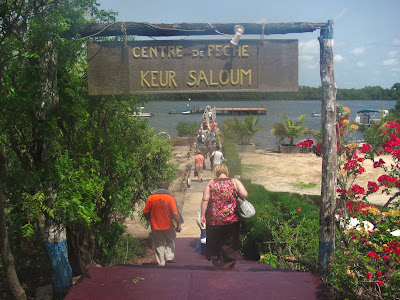 While staying at the Hotel Keur Saloum in Toubacouta, Fulbrighters got an opportunity to visit the mangroves in the delta. This would turn out to be a eventful day in which we learned a great deal, had some time to relax for a picnic lunch, and did our best to tolerate the heat. First of all, traveling to the mangroves, which I figure took us about an hour, was by boat. Awesome! We navigated westward through the Sine-Saloum Delta.
Our fearless leader, Samba. 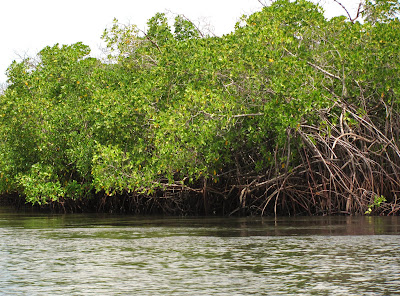 Ah, so mangroves are actually a tangle of trees/shrubs whose roots grow in the water. That does sound familiar after all. What's so special about them? 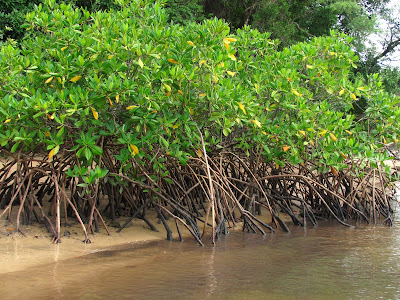 These mangroves are at the picnic area we would eventually return to for a relaxing afternoon. More on that later. 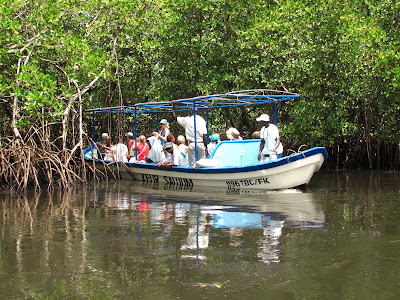 Reminiscent of the Disneyland jungle boat tours, our boats slowly entered deeper, denser clusters of mangroves where we would stop for a lecture on the characteristics, uses, challenges to existence, and other little-know facts about mangroves. Also reminiscent of the Disneyland tours, our guide told us that another tour group had seen a crocodile in these waters. If I wasn't awake before, I surely was by now! 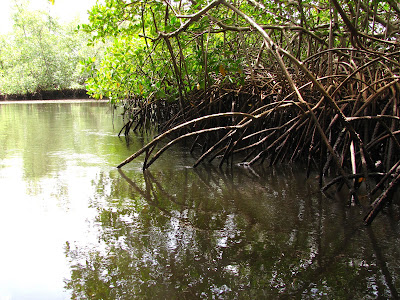 Some facts: Mangroves are a resource here because oysters attach themselves to the roots underwater. They can be found and harvested easily. Usually it is the women who will come to the shores to do the work. One problem is the way they have been harvested historically. The mangrove roots were cut away in order to get to the oysters. Obviously, that method means that the same mangrove plant will no longer be there as a habitat for oysters or any other kind of life. Sounds kind of like killing the goose that lays the golden egg, if you will. Mostly, that is not done anymore. We even observed the setting up of a rope system that entailed sections of rope dangling into the water right beside the mangrove plants. The ropes could be lifted out for harvesting the oysters and then returned to the water. No cutting. Voila! Mangroves are a habitat for crabs, barnacles, sponges, and fish as well. 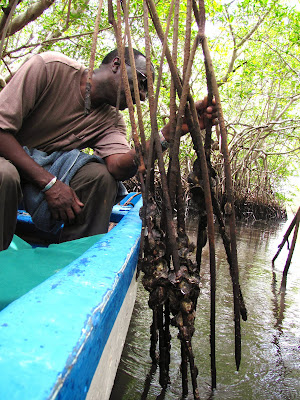 Mbye gets a good look at clusters of oysters attached to these mangrove roots. 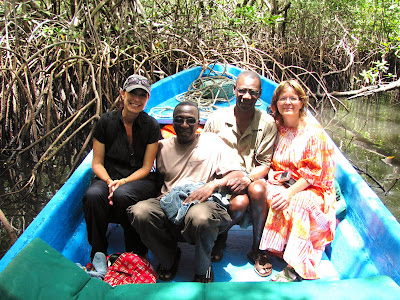 Me, Mbye, Samba, and Laurie. I now know the difference between the mighty mangroves of the Sine-Saloum Delta and the fictional mandrakes of Harry Potter fame. Mission accomplished.
Posted by Arlis Groves at 1:28 PM