While my earlier entry about the wildlife of Africa was satirical because many of us have preconceived ideas about what we will find in Africa, I did see a few, more exotic types of animals while traveling through the rural regions in Western Senegal. 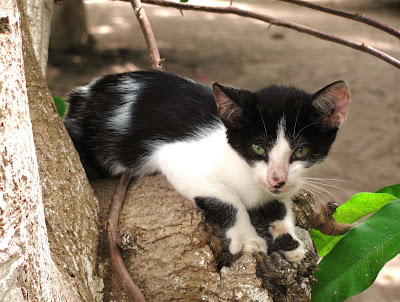 Not exotic, but very cute. This little 'un was perched in a tree just like her bigger, feline cousins would. This picture was taken at a hotel near the Pink Lake and just too cute to leave out. 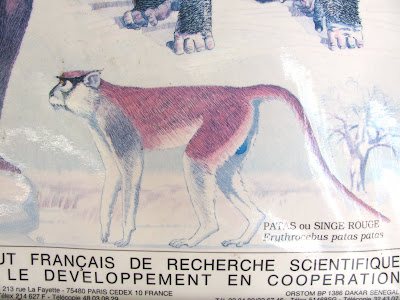 While staying at a hotel called Keur Saloum in Toubacouta, http://www.keursaloum.com/ , we actually did see monkeys in the wild. They were red in color and our hotel posted this illustration of monkeys found locally, so I think this may be the type we saw from our boat on the delta and from our bus on the highway. I was simply not near enough or fast enough to photograph the real ones. It was exciting to see them, though, sometimes in big family groups. 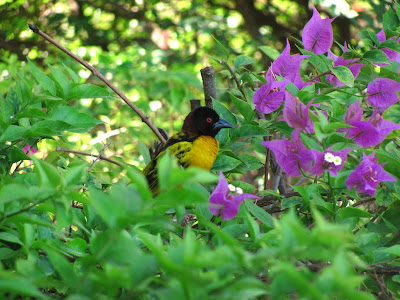 At the Hotel Keur Saloum just beyond the outdoor restaurant. These little guys would swoop down on the tables looking for leftovers. 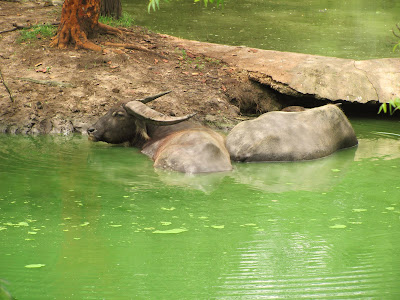 These water buffalo were NOT seen in the wild. They are living in the Reserve de Bandia, http://www.reservedebandia.com/description.htm, which is 65 kilometers from Dakar and 15 kilometers from Saly-Portugal. This was not on our itinerary, but was added after some of our group members expressed a desire to stop and see it. Our directors, Samba and Mbye, were wonderful about making sure we could see as much of Senegal as possible. They knew it may be our only opportunity. . . ever. As it turned out, we used the reserve as a lunch-only rest stop on the way back to Dakar, but from our outdoor tables, we had a view of a handful of the animal residents. 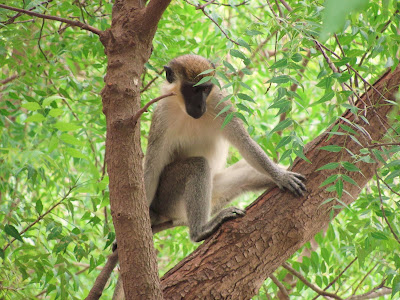 Keeping an eye on the pizzas and chicken that members of our group were eating, this guy had no problem hanging out very nearby. A Bandia Reserve resident. 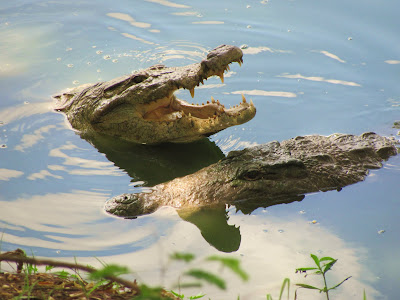 My National Geographic shot! :) Sometimes, you're in the right place at the right time. Upon arrival at the reserve, one croc stayed near the shore as we ate, I got some photos of him, but they were no big deal. His eyes and nose poked out of the water a bit, and sometimes he was only visible through the branches of the small trees between us. After a big lunch and a lazy afternoon, however, another croc came to call. Alerted by the growling or roaring of the second, I grabbed my camera and caught some action. As with all living photo subjects, the moment arrives, and then it's gone. Only minutes later, the second crocodile left the scene, and we had our peaceful, lazy afternoon back.
Posted by Arlis Groves at 8:50 PM