In order to apply to the Fulbright Hays Seminar Abroad program, a teacher must write a project, or follow-up plan. How, we are asked, are you going to disseminate the information you receive as a participant in this program? Honestly, it's tough to plan for a specific curricular focus when you haven't been through the seminar and don't truly know what you will learn or what may inspire you. I knew this: I teach middle school world history and U.S. history. Africa, especially West Africa, plays a huge role in both. I also knew that my students get more involved in the lesson when it is told in a narrative style. They love stories. So I endeavored to learn the stories of modern Senegalese residents, and beyond that, the stories of their ancestors. Eventually, I realized that my project focus would be communicating the idea that oral histories have been, and are important, not only in African history, but currently, and not only to Africans, but to American students as well. So my unit is called, "What's Your Story?", and these are some of the people who helped me tell it. 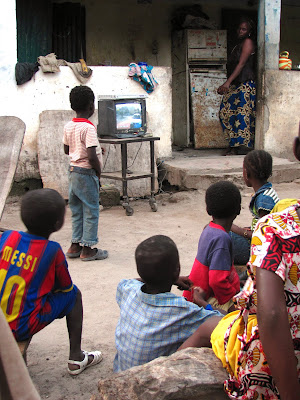 While in Toubacouta, WARC staff arranged for me to visit the family home of a farmer whose first name is Nouha. As we drove up to the farm, he was still in the field but had been forewarned of our visit, so rather than being annoyed with me for interrupting, he was welcoming and friendly. This was not going to be easy for me, because I do not speak Wolof or French. The interview would take place in Wolof. Thankfully, Waly, a representative of WARC, came along to lay the ground work by introducing my project idea and interpreting the interview. Nouha is the patriarch of a large, extended family living at this compound. He agreed to allow me to interview his teenage son, Talibouya, and his mother, Dieynaba. Thus, I had three generations in a Senegalese family who could tell me about oral histories which were passed from one generation to the next and demonstrate how well they remembered them. I video-taped the interviews, so do not have still photos to load here. The family was beautiful and their photos alone could tell you much about them. Grandmother Dieynaba was just returning from her granddaughter's wedding in her finest clothing. She was a joy to interview, so animated that, in order to keep her in the center of the frame, I had to pan with her.

The photograph above is of what was happening at the home behind and beyond the video-taping of the interviews. Nouha told me that when the soap opera comes on, the television is set up, and many members of the family gather to watch. This, he also said, was one reason that not so many family stories are told after dinner as they once were. Ipods and television shows have replaced them. 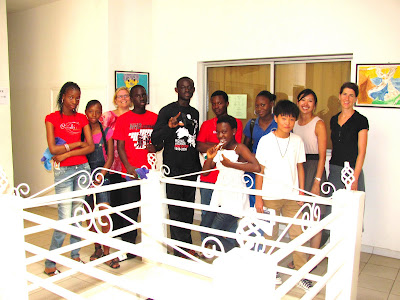 These Senegalese American Bilingual School (SABS) students made themselves available for interviews conducted by four members of the Fulbright program. Each of us, Amy, Yumi, Suzanne, and I, had a different project focus, so we organized a rotation system through which we each had a chance to interview as many students as necessary for our curricular focus. This time I was able to ask my own questions and understand the responses because these students speak English, often several other languages as well. One "take away" from the experience of talking to Senegalese about the histories and stories of their families is that, after becoming comfortable, they were very pleased to tell their stories. I hope my American students will enjoy looking into their own family histories and understand the importance of both listening to older generations and telling those stories to generations that follow. This is something am passionate about!
Posted by Arlis Groves at 12:15 PM