Introducing!. . . Senegalese stadium wrestling in Dakar.
I can't tell you how big wrestling is in Senegal. Light poles and walls of buildings, along with the the windows of buses and personal cars sport broadsheets announcing a wrestling event or promoting particular wrestlers. During our time in Senegal, we were able to see two wrestling events. This one was held at a stadium in the city and was dedicated to the issue of parity, or equality, for women. It was later televised and a couple members of our tour group reported seeing us in the audience on T.V. Incidentally, when we, the toubabs from America, entered the stadium to find our seats, we understood some of the words on the loudspeaker, which seemed to be announcing our arrival as guests.
The other wrestling match we saw was quite different. It took place in a village in Toubacouta. It was held in a small town square with a circle of plastic chairs surrounding a dirt patch, which was cleared of rocks and sticks by the youngest of the boys present. It was dark, and the power went out several times, so photos and videos of the action were of poor quality. Instead of the single match at a time spectacle we'd seen at the stadium in Dakar, the village wrestling matches had us watching three to four pairs of wrestlers at a time. It went very late, so only the young, strong, and brave stayed to the end. As a treat, they were asked to present the awards to the winners. I don't remember what they said all of the prizes were, except for the bag of rice. 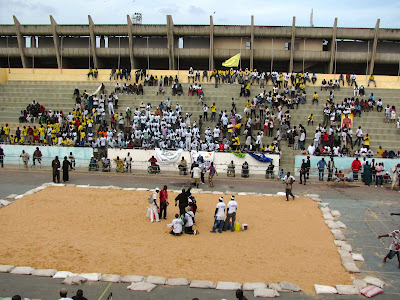 The arena in Dakar. Note that as the stadium fills, you can see fans wearing color coordinated clothing in support of their favorite wrestler. Sounds familiar, huh? The arena floor is sand, and trainers and crew members are in the middle plotting the best way to ensure the success of their wrestler. 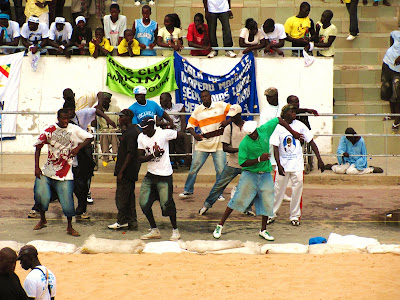 No Dallas Cowboy cheerleaders here, each wrestler has a group of dancers who circle the arena to drums and singing. The preparatory celebration is most of the spectacle. It takes place for about an hour, with the actual wrestling match lasting only a couple of minutes at most. 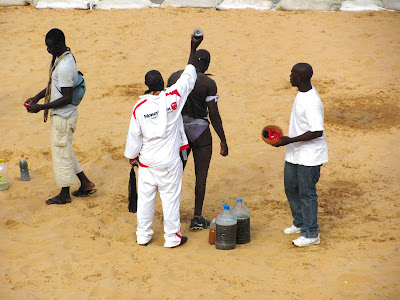 "What", we asked, "is going on here?" The answer: The trainers are using mojo on the wrestler to protect him and curse his opponent. I saw mixtures of liquids poured over the wrestlers, writings drawn in the sand, circling of the arena with ropes dragging along behind, an egg thrown on an opponent, and some other interesting behaviors. I wouldn't be surprised to learn that my mouth hung open as I watched the event, because it was so different than anything I'd seen before. 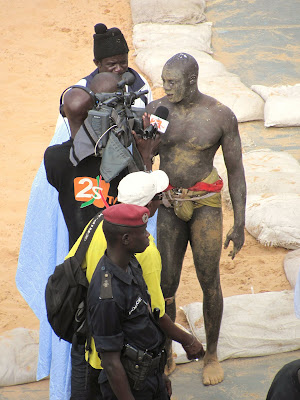 I call this photo "The Thrill of Victory". (Thanks ABC's Wide World of Sports) 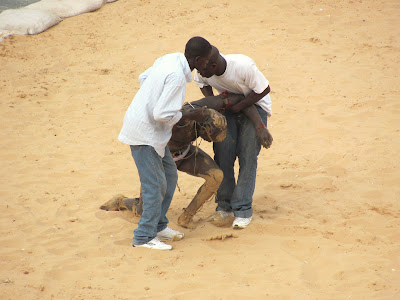 "The Agony of Defeat" 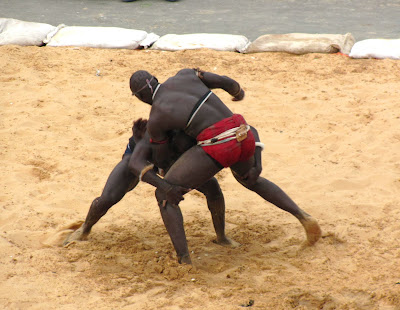 The goal: Get the other guy on the ground. Can you hit and punch the other guy? No. Do they? Yes. Does a ref step in? Yes. 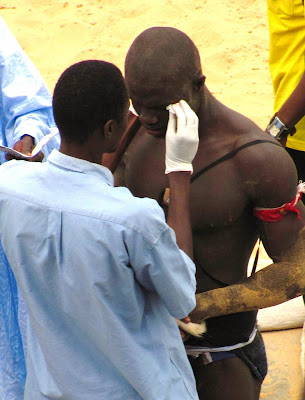 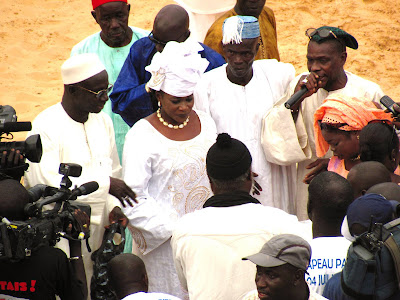 Here, lots of media attention goes to Ndeye Ndiaye Tyson. If you follow my blog, you've already met her. She and Yelimane Fall are pictured at the Village Pilote, a center for children found on the street. I describe it in my July 11th entry called, More on Education. Tyson, the first woman wrestling promoter and a community advocate, is held in high regard. 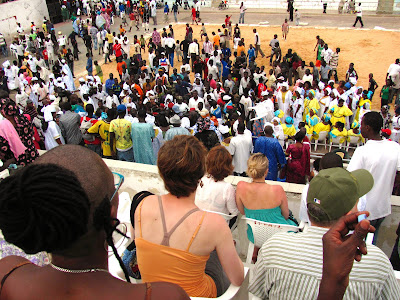 After the event is over, the crowd fills the arena. Dancing and excitement spills out to the streets. Our bus had to take a small detour to avoid some of that excitement.
A match:
http://www.youtube.com/watch?v=3ROGU-pP2Lk
Posted by Arlis Groves at 6:24 PM